An article in the London Times on August 28th, 2018, described a miracle moment of baby Max when a cochlear implant was switched on in May 2018, just after his first birthday, and Max turned to his mother, Rebecca,  in wide-eyed, open-mouthed astonishment.

The cochlear implants, which cost about US$10,00 for each ear, are electronic devices that perform the same action as the inner ear, or cochlea, which is often damaged in people who are deaf.

A sound processor worn outside the ear captures sounds and turns them into digital signals that are picked up by an implant placed inside the head via surgery. It converts the signals into electrical impulses that it sends through the ear to stimulate the hearing nerve. This sends signals to the brain that are interpreted as sound. 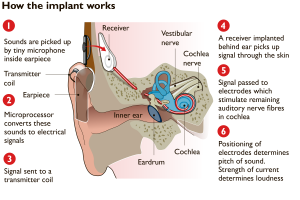 The research efforts on cochlear implant had been long that started  in the 1950s, thanks to the pioneering efforts of scientists such as Mr Djourno and Mr. Eyries in France, Dr James Doyle in USA,  Dr Simmons in USA, and Dr Graem Clark in Australia.

An excellent 1993 paper by Andrew H. Van de Van and Raghu Garud, Innovation and Industry Development: The Case of Cochlear Implant, examined how the cochlear implant industry had emerged from 1960s to 1990s. They noted the existence of an industrial infrastructure that includes institutional arrangements, resource endowments, and technical economic activities.

It is found that this infrastructure of cochlear implants industry emerged through an accretion of numerous technical and institutional events involving many public and private sector actors over an extended period of time.

Moreover, this institutional arrangements and resource endowments that emerged to facilitate and provide momentum of the cochlear implant industry became the inertial forces that hindered subsequent technological developments by private firms. The findings emphasize that the management of innovation must be concerned not only with micro-developments of a proprietary technical device but also with the creation of an industrial system that embodies the social, economic, and political infrastructure that any technological community need to sustain its members.

You can upload the article by clicking below.

Innovation and industry Development- the case of cochlear implants