We are a keen follower of the host of The Bizarre Food, Mr. Andrew Zimmern. He eats all kinds of bizarre food. In the many episodes, we had not watched him eat a most bizarre food, namely porcupine bezoar.

Porcupine bezoar is a very expensive herbal food in traditional Chinese medicine. The Chinese believe that porcupine bezoar can treat various kinds of cancer if you can afford it. In Malaysia, a gramme of porcupine bezoar costs about RM 700 (US$/RM exchange rate is 1=3.9). This is despite little scientific research evidence to confirm its effectiveness.

Porcupine belongs to the herbivores group of animals. In Indonesia and Malaysia, they feed on bitter-tasting roots and branches of plants and herbs. The diet of porcupine is associated to its strong immune system and ability to self-heal quickly. Porcupine is considered to possess strong immune system that effectively fights toxins and inhibits the effects of poison from its diets.

Bezoar means antidote in Persian language. It is explained that the herbs that porcupine eats when it is sick contain chemical compounds that help fight the damages caused by toxins as well as facilitate healing. The used-chemical compounds from herbs ingested by porcupine form a stone-like-substance inside its body, which is called bezoar. The Chinese takes porcupine bezoar to treat diabetes, hepatitis and dengue fever. It is also taken by cancer patients. The porcupine bezoar stone is formed in the bodies of porcupine is composed of several layers that it looks like an onion. The various grades of porcupine bezoar are shown in Picture 1.

Picture 2 shows the cross section of a porcupine bezoar. 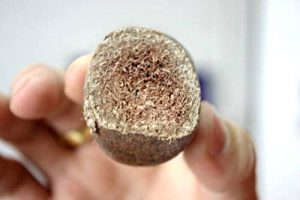 Inside of Porcupine Bezoar

It is necessary to use modern surgery to recover porcupine bezoar from the stomach of the porcopine without killing it. There is also a need to understand under what conditions and circumstances that a porcupine develops a bezoar in its stomach. This may increase the rate of porcupine bezoar that could be harvested in a population.

We are consulting a Malaysian company which intends to develop a sustainable method to breed porcupines to harvest porcupine bezoar. The key to the success of the project is to identify herbs that are taken by porcupine in the wild that give the unique potency of the porcupine bezoar.

Webelieve when one has cancer, a ball of uneaten herbs in the stomach of a porcupine is not very bizarre after all.